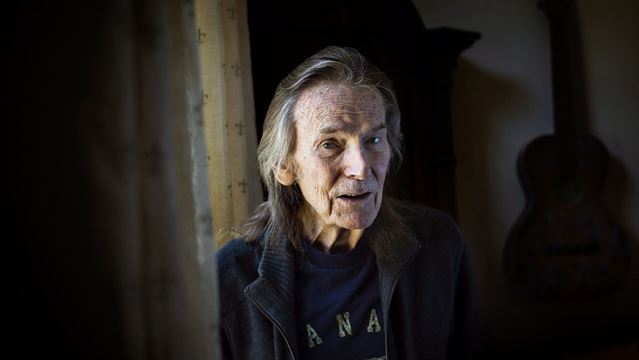 Canadian legend Gordon Lightfoot is performing at Centre in the Square, Kitchener ON, on Thursday, his birthday (show info). Ph: Aaron Vincent Elkaim, The Canadian Press

Lightfoot is about to start his November tour of Ontario, Canada; a tour which will take him to Chatham, Kitchener, Belleville and Ottawa and finish with four nights at Toronto's Massey Hall. Joel Rubinoff at the Waterloo Region Record got a great interview with him, reproduced below. "Genius" indeed!

He's a Canadian icon who still relates to the part of himself that once worked as a truck driver, an office worker, an onion skin paper music transcriber, back when he was young, unknown and had nothing.

A masterful songwriter more likely to defer to his backing band than take credit for himself.

A perfectionist who remembers with jarring precision the edits made on a radio hit from 40 years ago.

A guy who lives in the moment, but never forgets.

And at an age when most artists are settling in for the Slow Fade, he's out on the road, playing for the crowds who have seen him through good times and bad, aware of his mortality, savouring every minute.

"We love to work while the sun shines," notes the Orillia native in his genial, good humoured way. "Because the night will come when you may no longer work — that was from Dylan."

When he picked up the phone for a late night interview a few days ago, I figured we'd have 10 minutes to speak, 15 tops.

That's how it is with most celebrities: wham, bam, and don't forget to plug my latest project, whatever your name is.

Lightfoot — low-key, sincere, Canadian in the ways that matter most — gives the impression of having all the time in the world.

"Good for having you aboard," he says like a captain welcoming a new crew member. "How are you doing?"

How am I doing? This is Gordon Lightfoot, for crying out loud.

For the generation of Canadians who grew up in the '60s and '70s, he's the musical equivalent of maple syrup and Mounties, a guy who not only represented Canada at a pivotal moment in its cultural history, but actually became its voice.

"I have just a really strong love for people when I perform, I really do," notes the modest songwriter, deflecting suggestions he is in any way larger than life

"It's almost like you're playing to everybody individually. You've probably heard that said before, but that's what it feels like to me."

Lightfoot comes off in interviews as a happy guy, considerate of others, content with his lot.

But dig a little deeper and he'll peel back the blinders — only so far, mind you — on the hardships and frustrations that have fuelled his best work, the sobering introspection that seems not only part of the man himself, but the struggling ambitions of the country that spawned him.

"I was going to school in Los Angeles and I was homesick," he says of his iconic ode to loneliness, "Early Morning Rain." "I was one of those kinda guys. I missed my parents."

The song, the tale of a wistful loner watching planes take off "with an aching in my heart/ And my pockets full of sand," captures the mood of bittersweet reflection for which Lightfoot would become famous.

"I found something romantic whenever a new type of airplane came out," he confides softly. "And all of the sudden here was this beautiful brand new Boeing 707 taking off into the sky and just disappearing right into the cloud cover."

The truth is, most of his hits have a tinge of sadness.

"The Wreck of the Edmund Fitzgerald," his acknowledged masterwork from '76, is about a capsized freighter with 29 dead crewmen.

And don't get him started on "For Lovin' Me," covered by everyone from Elvis Presley to Peter, Paul and Mary, in which he callously informs his lover "I got a hundred more like you."

"I sang that for 25 years," he confides, explaining why he excised it from his set list.

"And every time I sang it I felt badly because it was a song I wrote while I was in a marriage I knew wasn't going to work out, and it must have been terribly offensive to my wife.

"After a while it bothered me so much when I would sing it, I would find myself thinking about what a terrible person I was at the time."

He is, to be sure, his own toughest critic, conflicted in the way all great artists are conflicted, as I discover when I ask about the 50th anniversary of his iconic debut album, "Lightfoot!"

"First of all, I was working solo," he recalls matter of factly. "We did it all right there one take — no overdubbing or any of that stuff.

"So it's a very raw kind of a romantic thing that even I didn't find particularly exciting. Even within myself, it bothered me. I tried to keep working my way into a more uplifting mode as it went along."

To be clear, the folk-influenced "Lightfoot!" — which includes oft-covered songs like "For Lovin' Me," "Steel Rail Blues," "Early Morning Rain," and "Ribbon of Darkness" — launched his career as a songwriter, predated the singer-songwriter movement by half a decade, and is an album every Canadian musician with an acoustic guitar has turned to as a source of inspiration.

Lightfoot, who can't separate the work from the context in which it was recorded, doesn't see it.

"It kinda depresses me in a way when I hear it," he concedes bluntly. "But still, it's got some quality in there like 'Oh, Linda.' Several songs in there resonate very well even today."

It's not the only time in our freewheeling conversation he'll defy expectations.

As it turns out, most of the classic tunes we take for granted as part of our cultural heritage are rooted in the reality of a guy who, at the time he wrote them, was struggling with the issues of day to day life: raising kids, relationships, angling for a break.

That's what Lightfoot remembers when he looks back.

"You know, I shouldn't use that word," he offers when I suggest that "depressing" may not be the best way to describe his musical breakthrough.

"I shouldn't deflate myself. I kinda remember where my head was at when I was doing that stuff I was going through.

"I was married, two young children, fighting to keep it together. It wasn't working, the marriage declined.

"It reminds me of a time I sometimes would rather forget."

Maybe because our phone conversation takes place in the evening, after the hustle and bustle of the day has subsided, the aging minstrel seems less the reclusive genius I expected and more an affable storyteller, eager to share minute details of a career that has had its share of peaks and valleys.

"We did some great stuff," he says, recalling his recording stint with L.A. based Warner Brothers.

"They had Michael McDonald, Paul Simon, Arlo Guthrie, Randy Newman. We competed against one another.

"Every time you wanted to do something you'd hope it would score. You'd keep trying and trying and all of the sudden something would come right out of left field — like 'The Wreck of the Edmund Fitzgerald.' No one had any idea about that one."

Edmund Fitzgerald, a Canadian history lesson set to music, became what is arguably the most unlikely hit single of all time, a six-minute opus about the sinking of a Great Lakes freighter with lyrics culled from journalistic accounts in The Toronto Star and Newsweek Magazine.

"That was written as a folksong for an album," notes Lightfoot of the haunting, emotionally resonant anthem. "No one had any idea it would become a popular song."

And yet there it was, in Nov. '76, jostling for position against brain dead competitors like "Disco Duck" and Steve Miller's "Rock'n Me," sticking around almost two months in the Top 10.

"The legend lives on from the Chippewa on down/ Of the big lake they called 'Gitche Gumee'" — seriously, how did it ever see the light of day?

"I can explain that to ya," offers Lightfoot, as my Grade 11 self wishes this conversation had occurred 30 years ago, in time to nab an A on my "Songwriters of Canada" English assignment.

"I was up in northern Manitoba. I had just canoed down the Churchill River from Alberta on a 25-day trip.

"When I got down to Pelican Narrows, there was a telephone call from my sister saying they wanted to add it to the Top 20 in L.A., but they can't because it's too long. It would be the difference between No. 20 and No. 1.

"So I started counting the bars and I figured out a way to edit all the instrumentals by one half, by taking it out of the middle.

"So they did the add, it got noticed by the trade papers and the next place it finally stopped was No. 1 in Cashbox magazine and No. 2 in Billboard.

Does it frustrate him that Rod Stewart's cloying sex ballad Tonight's The Night kept it from the top spot?

He laughs. "Hey, maybe that was a good thing. I was pleased that it happened, but it was done at behest of the record company. I didn't want to rub it in."

When asked what per cent of his success derives from talent vs. perseverance and ambition, he fires back "HOW ABOUT PAYIN' THE BILLS!" as if it's the most obvious thing in the world.

And while he's thrilled his old pal Bob Dylan won the Nobel Prize in Literature — though he thinks Stompin' Tom Connors should receive one too — his take-away from their longtime relationship is not what you might expect.

"I had a really great chance to admire his work, because I was part of the office," he says of the days when the two were signed to the same label. "And what I learned from him most was to GET THE JOB DONE! Really, honest to god — just sit down and do it!"

He's a practical guy. Always has been.

"I love doin' the shows," he reveals when I ask what's kept him on the road in the 14 years since a near fatal stomach aneurysm almost ended his career.

"The ship of state is still afloat and I've still got the vocal — and the desire."

By this point, we're hitting the one hour mark. And while the grizzled troubadour graciously agrees to continue, I'm feeling guilty about monopolizing a guy who, during the first Trudeau reign, was as big a Canadian figurehead as that other Gord (Downie) is during the second.

But there's still lots to talk about:

Before we finish, I decide to grill him one last time on the question he's scrupulously avoided: the enduring appeal of his songs, the way they manage to encapsulate ...

"The feelings people have," he breaks in, taking the bait. "The emotional trauma and emotional stress people are asked to deal with is astronomical. Hardly anyone ever speaks about it.

"Everybody's got so much of their own to deal with. They have no one to turn to.

"I guess music is one of those things that really lifts people up."

It's not an admission of greatness, but after poking and prodding for more than an hour, it's as close as I'm gonna get.

Published with permission from Joel Rubinoff at the Waterloo Region Record. Original article posted at the newspaper's web site www.therecord.com.