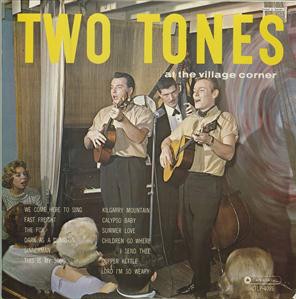 In January, 1962 Gordon Lightfoot recorded a live album, performing with his high school friend Terry Whelan in a duo called the Two Tones. The album, called Two Tones At The Village Corner, was released on two record labels, Chateau and Canatel. Most of the songs are international folk, including standards such as The Fox, Copper Kettle and Kilgarry Mountain, but Lightfoot included one original (This Is My Song), and also a Merle Travis song called "Dark As A Dungeon"; that's his partner, Terry Whelan, introducing "Gordie". The original song is nothing like those he would be writing and performing a year and a half later, but his vocals on the Travis standard were very much in the "Lightfoot style", and his guitar playing illustrates "Travis style" fingerpicking, which he would go on to use in many of his songs over the next five decades.

Audio of "Dark as a Dungeon"

This was available as an MP3 album for a few years, but was withdrawn. Recently, I discovered that the songs (or most of them) are now available on several other MP3 albums, a few on each one. Like the Two Tones album, the recording sounds like "needle drop", meaning that it was recorded off a record, and not off the master tape. If you don't have these recordings, they are worth the price. You can find the songs here. Note that many tracks are on more than one album, so keep track of which songs you have already purchased (or put in your MP3 cart). Also, if there is no Buy Button on the song page, click through to the album it is on and it will probably be purchasable there. (Nothiing is easy).

In the UK, the album is available for purchase here.